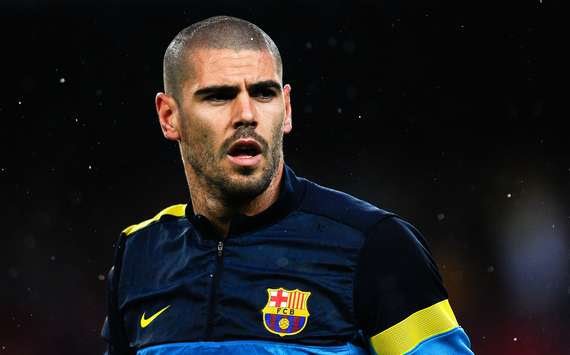 Barcelona have sacked Juvenil A head coach, Victor Valdes with immediate effect, amid rumours of a bust-up with Patrick Kluivert behind the scenes.

The Spaniard has been relieved of his duties with the Blaugrana U-19 squad, after a reported disagreement with the club’s director of youth football.

Valdes returned to Camp Nou to take charge of the U19s back in July, five years after ending his time at the club as a player.

The 37-year-old rose through the La Masia ranks before earning legendary status at the club during a trophy-laden 12-year spell in the senior team, winning six La Liga titles and three European Cups.

He was expected to oversee the development of Barca’s next generation of stars, but his coaching stint has been cut short prematurely.

Widespread reports have suggested that Valdes and the club’s director of youth, Kluivert, do not see eye to eye, with friction between the pair reaching boiling point over the last week.

Valdes did not appear on the sidelines during Barca U19’s 2-1 win at Gimnastic de Tarragona on Saturday and he has been officially dismissed on Monday morning.

Barcelona have released a statement on their website, which reads: “FC Barcelona has told Víctor Valdes that he is no longer the coach of Juvenil A and belonging to the Club.

Goal understands that Kluivert was not the only man to take umbrage with Valdes during his 80 days at the helm, with several club officials angered by his approach on and off the training field.

More eyebrows were raised when the former Spain goalkeeper insisted on using a 4-4-2 formation, which goes against Barcelona’s strict 4-3-3 model at youth level.

Valdes worked closely with teenage sensation Ansu Fati before he made his senior breakthrough at the start of the season, insisting he can become an “elite player” if he continues to apply himself.

Fati, 16, has netted twice in six appearances for Barca this season, becoming the club’s youngest ever La Liga goalscorer in the process.