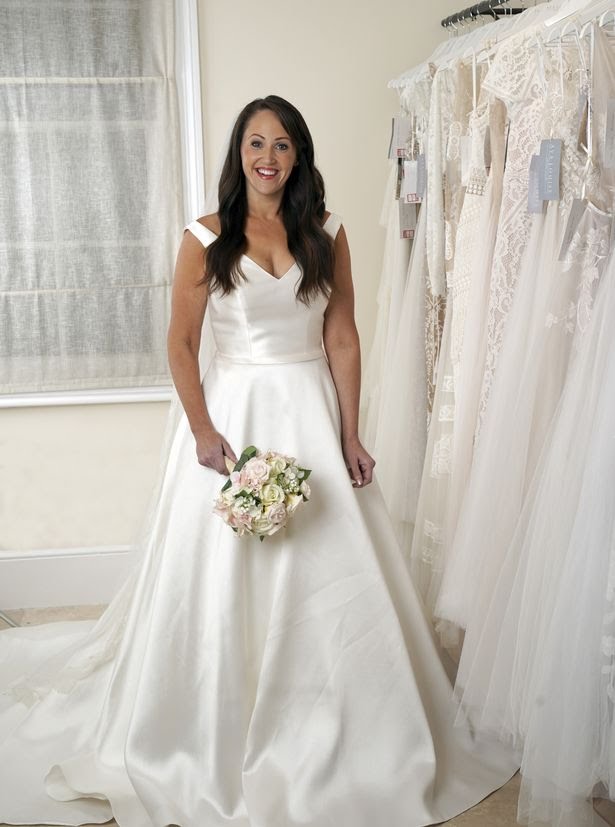 Bride-to-be Charmaine Brooks can’t half wait to get married to the man she loves after putting off her wedding for 18 years – and that’s because she’s HALF her old weight.

After years of loathing her 18-stone body and a rollercoaster life that kept her comfort eating, mum-of-two Charmaine, 36, tries on wedding dresses and says: “Now I have a new confidence.

“There was a time looking at holiday pictures made me cry and the thought of getting married and being looked at made me feel sick and hideous. Now I can’t wait to wed the love of my life.”

And proud fiancee Darren Squires, 44, says: “She looks as beautiful now as the day we met. When I see her walking down that aisle towards me it’ll the happiest moment of my life.”

Charmaine – who has lost a remarkable eight-and-a-half stone – admits she didn’t have an easy start in life and was put into care for a year when she was 12. After battling her weight for years she became so heavy she could hardly stand.

James Corden looks amazing as he shows off his one stone weight loss while filming
She ballooned from a size 8 to a 16, then had to be mum for her three siblings while sitting GCSEs when her own mother was in hospital.

But then, at 17, she met roofer Darren. They became inseparable and in a year Charmaine was pregnant.

“My home life growing up had been surrounded by alcohol, drugs and violence – and now I had this gorgeous man in my life who loved and me was so dependable,” says Charmaine.

But by the time she had given birth to son Nathan in May 2002, she had put on five stone.

“I ate for four, not two, and was told by nurses I was putting our baby at risk of gestational diabetes,” she says.

“Luckily, Nathan was born without health issues but, looking back, I know I dodged a bullet.”

Six weeks after the birth, Darren proposed. “I jumped at the chance to say yes,” says Charmaine.

“But we’d had a few drinks and kind of left that thought lingering as we dealt with sleep deprivation and nappies.”

Knowing she had to shed her baby weight, Charmaine managed to lose three-and-a-half stone before finding out she was expecting again.

“Nathan was just six months, so during that second pregnancy I was so exhausted I survived on junk food. By the time Aimee was born I was 17 stone.”

Again, former care worker Charmaine, from Southampton, fought to lose weight and slowly reached 13 stone, but then had to deal with the shock of being told Nathan and then Aimee had special needs at school.

“I had to give up the job that I loved, working with adults with mental health problems, to be there for Nathan and Aimee,” she says.

“Within a few months we’d lost my income, our children were really struggling, and then the 2010 credit crunch hit and Darren’s work dried up,” she said.

Charmaine sunk into a crushing depression. “I was so bad I told Darren I didn’t love him any more as a way of making him push me away,” she says.

“I felt so negative. I couldn’t deal with the kids or the house. I slept almost all the time. Darren was left to do everything.”

Then, as Charmaine started to come out of her depression, Darren, unable to be the provider he felt his family needed, had own mental health problems.

“We went from frying pan to fire, but we never let go of each other or our kids,” she says. “When you’re dealing with that kind of nightmare, health is the last thing on your mind – and my weight rocketed again.

“I was eating up to 20 bars of chocolate a day and massive take-aways. My pudding after dinner every night was a family-size bar of Dairy Milk.

“I had zero self-confidence and stopped going out or putting make-up on. I was too big to play with my kids and couldn’t stand more than 10 minutes because of pressure on my ankles.”

But everything changed on a family holiday to Poole in 2014.

“We had a pedal cart to go round the campsite and I had to get off as I was too heavy for Darren to pedal. I got back on and tried to take a family selfie, but I was too big to fit us all in, so a woman offered to do it.

“It was the first picture of me I’d seen in years. I was horrified. My arm was bigger than my head, and my thighs spilled out of the cart. I looked like an obese Donkey Kong!”

It was a life-changing moment. Charmaine vowed to lose weight and started the Cambridge 1:1 diet, replacing meals with nutritious shakes. A 50-day Facebook challenge in 2015 increased her focus.

“My consultants Christine and Costas at 2Cchange were amazing. I knew I had eight or nine stone to lose, but by breaking it down, I knew I could do this.”

While dealing with Nathan and Aimee’s mental health problems, her weight yo-yo’d at first, but by Christmas she was almost at her goal weight of 10st 10lb.

“I was able to fit into some size 8 clothes for the first time since I was 17, and then knew what I had to do,” says Charmaine.

“I got a Love Books Online printed as Darren’s present, with the back page asking if he’d finally marry me – and the kids walked in carrying the ring. He said yes, more than 17 years after we got engaged.

“I had already bought a size 12 wedding dress – which I’ve had to have taken in twice. It feels like our lives are so special together.”

The couple are now planning for their big day in March in front of around 100 guests. “We’ve been through such lows and highs. I’m now 10st 7lb and feeling incredible. And I’ve trained as a Cambridge Weight Plan consultant to inspire others. If I can do it, anyone can.”

The presidency has reacted to the call by the General Overseer of the Redeemed Christian Church of God (RCCG), Pastor Enoch Adeboye, for restructure of Nigeria as

The General Overseer of the Redeemed Christian Church of God (RCCG), Pastor Enoch Adeboye, has advised the federal government to restructure Nigeria, in order to get rid

By Chioma Obinagwam Barely few hours after Nigeria’s president, Muhammadu Buhari addressed the country, there have been reports of a genocide attack going on at the Oyigbo