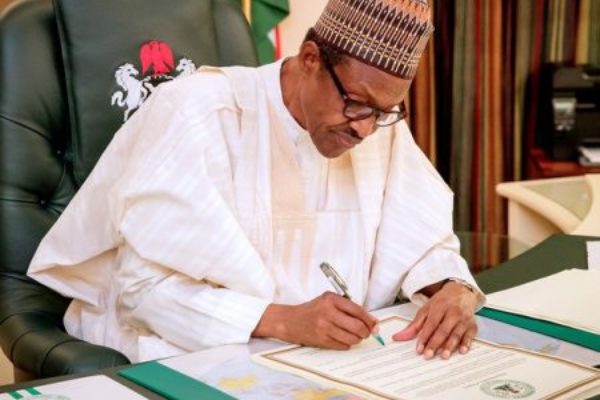 Nigeria’s President, Muhammadu Buhari, has given a nod to the disbursement of the Cabotage Vessel Financing Fund (CVFF).

Confiance News gathered from a report by the Sun.

According to the report, the Minister of Transportation, Muazu Sambo, made the disclosure at the flag off ceremony of the third phase of the Nigerian Seafarers Development Program (NSDP) TERRA 2, held at the Naval dockyard in Lagos.

The event, which took place on Saturday, is coming 18 years after ship owners’ contribution to the controversial Cabotage fund.

The approval for the disbursement of the fund, the Minister said, was borne from President Muhammadu Buhari convinction that the money belongs to ship owners.

It would be recalled that the CVFF was established alongside the Nigerian Coastal and Inland Shipping (Cabotage) Act of 2003, to empower indigenous ship owners to take control of the nation’s coastal and inland shipping business, otherwise known as Cabotage trade.

He said that the approval would break the 18-year-old jinx that has hindered the expansion of the shipping industry.

Sambo stated that five lending institutions have already been approved by the National Assembly for the disbursement. The institutions include Union Bank, Polaris Bank, Zenith Bank, UBA and JAIZ bank.

According to him, the ministry of transportation is currently liaising with the minister of finance, budget implementation and the governor of the Central Bank to work immediately for the approval.

His words: “The president of the Federal Republic of Nigeria, Muhammadu Buhari has approved my request for the disbursement of the Cabotage Vessel Financing Fund. It is my belief that finally we are going to break the 17-year-old jinx that has hindered the expansion of the industry.

“When we disburse the funds in days to come to the deserving beneficiaries. We have made a case that the funds belong to you ship owners. Mr president is a man who respects the law and he is on the same page with us that we should proceed with immediate effect. We will be liaising with the minister of finance, budget for implementation and the governor of the Central Bank of Nigeria (CBN) to work immediately for the approval.

“We have pledged to the president that they would continue to allow the funds to go into the treasury single account; however, whenever the money hits the threshold of $50million the CBN upon recommendation from Maritime Administration and Safety Agency (NIMASA) and the Federal Ministry of Transportation would inspect the transfer of the funds to the primary lending institutions.”

In this regard, he said that five primary lending institutions have been approved by Mr President to do the disbursement.

Meanwhile, the Director General, NIMASA, Dr Bashir Jamoh, said that the funds are in two folds, which is N16 billion and $350 million, with the N16 billion being the addition to the $350 million earlier announced by the former Transport Minister, Chibuike Amaechi.

He assured that there would be timelines for the disbursement, down to the issuance of the cheques to the beneficiaries.

Confiance News also gathered from Wikipedia- a free online encyclopedia, that Cabotage is is the transport of goods or passengers between two places in the same country, which originally applied to shipping along coastal routes, port to port, but now applies to aviation, railways, and road transport as well.