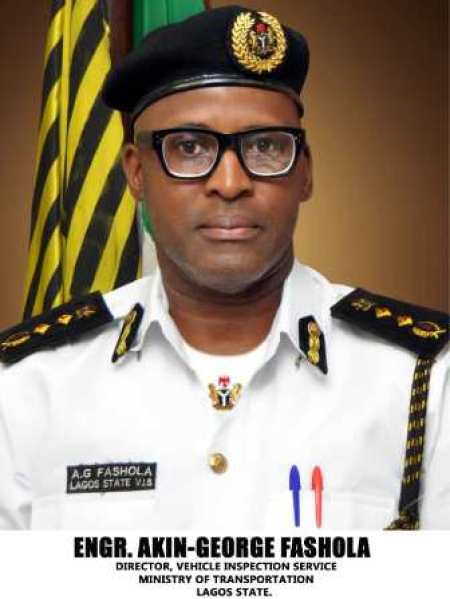 Lagos State government has said no vehicle would be issued road worthiness certificates without physical inspection with effect from January 1st, 2022.

The state’s Commissioner for Transportation, Dr. Frederic Oladeinde, who revealed this at a stakeholders’ meeting with all transport operators in Lagos, said motorists would have to present their vehicles for physical inspection at any of the designated computerised vehicle inspection centres across the state before they would be issued a road worthiness certificate.

Oladeinde explained that the new policy is geared towards making the road safe for all users and in line with the THEMES agenda of the Babajide Sanwo-Olu administration.
He added that the new policy would void the hitherto practice where any motorists can procure road worthiness certificate without presenting the vehicle for proper checks.

According to him, the move is to further strengthen the safety of the roads by ensuring that all vehicles plying Lagos roads are road worthy.

“No one would be able to obtain road worthiness certificate anywhere in the state without the Vehicle Inspection Service (LACVIS) certifying such vehicles road worthy,” he said.

He said any motorists who failed to have his vehicle repaired within the grace period would have to process another road worthiness certificate to enjoy the 30 days grace.

Oladeinde said the meeting with the stakeholders was a forum to collate the suggestions or challenges that stakeholder feel might impede the success of the policy, assuring that their views would be presented to the Governor for consideration and appropriate actions.

“I have taken down all your questions and observations and I want to assure you that I would present them to Mr Governor for appropriate action,” the Commissioner said.

The commissioner stated further that if a vehicle passed the minimum safety standard of the computerised test, such vehicle would be issued the certificate, adding that anyone whose vehicle failed the tests would be given one month grace period within which to fix the problems on such vehicle after which it would be returned for certification test upon which a road worthiness certificates would thereafter be issued.

He therefore, urged all transport unions leaders to help the government by ensuring that all their members know about this policy as no one would be able to procure road worthiness certificate without taking their vehicles for inspection.

He also pointed out that already 26 centres have been established and plans are in place to ensure that all the 20 local governments and 37 Local Council Development Areas (LCDA) have the computerised centres.

“For public transport vehicles as well private there are basic or minimum safety standards which all vehicles must comply with to be given a road worthiness permit and any vehicle without it should be voluntarily taken off the road and not wait for the VIS to impound them,” Fashola said.

He explained that the Automatic Number Plate Recognition (ANPR) machines installed on the CCTV camera installed across the state have been calibrated to recognise the 30 days grace period and would not enter any infringement against anyone who had presented his vehicle for such checks within the grace period.

He said all classes of vehicles including trucks, articulated vehicles, commercial buses, corporate fleet operators and private cars would be adequately covered once this policy rolls out next year.

He stressed that the VIS would not go after anyone but patiently wait for violators of the law to be apprehended and be made to face the music, adding that state decided to embark on this policy drive to ensure that anyone who obtained the certificate indeed has a vehicle that is road worthy.

Fashola stated categorically that on several occasions the state had been held vicariously liable in cases of litigation where vehicles that are not road worthy had caused collateral damage and litigants are prosecuting on the strength that such vehicles obtained appropriate certificates to operate on the road.