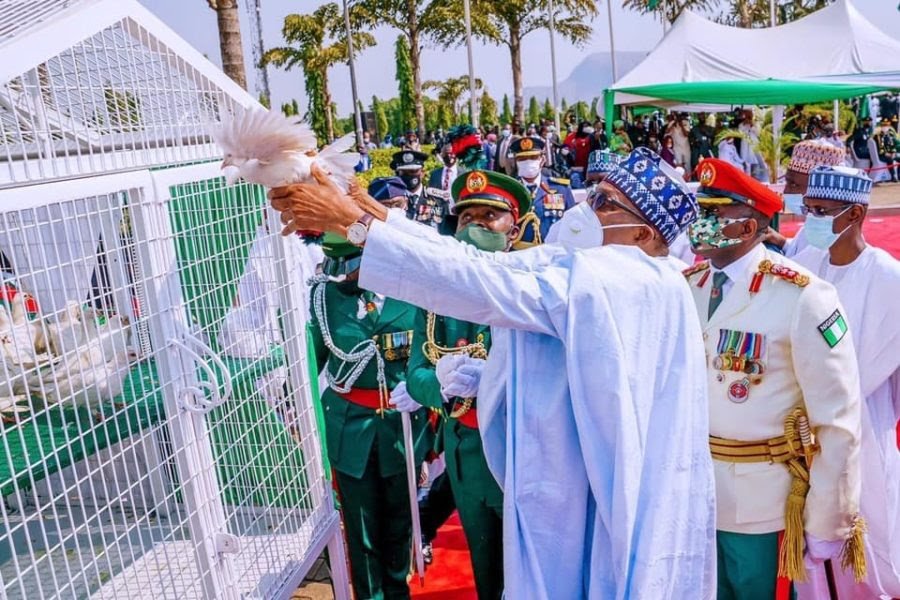 Nigeria’s president, Muhammadu Buhari was left bemused and apparently embarrassed on Friday after efforts to perform the yearly ritual of releasing pigeons to mark the Armed Forces Remembrance Day ceremony did not go as anticipated.

Several efforts by the Nigerian leader to persuade a bunch of white doves to fly out of their birdcage proved abortive at the National Arcade Friday afternoon. A large number of the resistant birds interestingly flew out of the cage shortly after President Buhari had left the scene following repeated unsuccessful tries.

Many Nigerians who reacted to the incident on social media, adjudged the action of the birds to be a reflection of the widespread disunity and worsening security situation in the country.

Peoples Gazette, however, learnt that it was not unusual for pigeons to refuse absconding their cage during celebratory events.

A similar incident had occurred at the Eagle Square during the 2013 Remembrance Day under former President Goodluck Jonathan.

In 2010, the same had also transpired at the Abia State capital, Umuahia, when former Governor Theodore Orji could not get the pigeons to fly on the Armed Forces Remembrance Day commemoration for for the state’s fallen heroes.