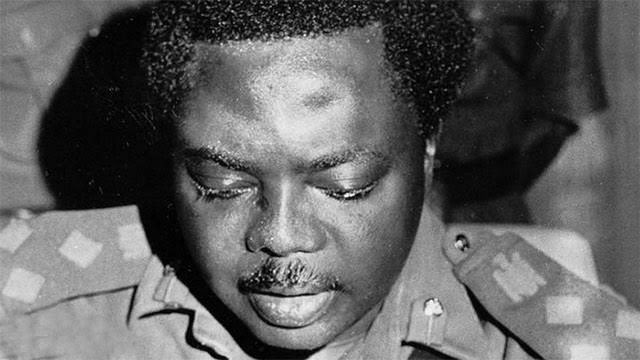 Some Nigerians have reacted negatively to the call by Bashir Ahmad, the Personal Assistant on New Media to the President of Nigeria- Muhammadu Buhari to celebrate Nigeria’s former military head of state, Murtala Mohammed, who died 45 years ago on February 13, 1976.

Murtala was a coward. During the Abagana ambush where only 700 intrepid Biafran soldiers decimated 6000 FG troops, he ran away and left his soldiers to die like chickens.

Murtala could only display his power on Women and children; he never won a single battle in his life time.

Reactions have continued to flow in as Asaba trended on Twitter- a reflection of late General Muhammed’s role in the bloody Asaba Massacre of 1967.

Hero? For what exactly? The Asaba massacre?

Young man you need to read this book….
No be today ur Oga's tyranny begin pic.twitter.com/EQQlLoKlMg

This man was responsible for what is known as the "Asaba Dance of Death." when he commanded the Second Brigade during the Nigerian Civil War. His soldiers lined up innocent civilians, asked them to dance and machine-gunned them.

One of the survivors is Professor Pat Utomi. https://t.co/1lX5bsCanG

My father escaped this man's killer squad during the Asaba massacre in 1967 with nothing but the clothes on his back. Had he been killed I would literally not be alive. May God punish you and everyone else who continue to venerate this war criminal. https://t.co/YjEqb86Ir7

Sorry sir, these are our heroes ! pic.twitter.com/KPZzlprkMz

Although the memories of Asaba Massacre still lingers, others, however, shared divergent views by offering prayers and goodwill messages.

May Allah continue to have mercy on his soul and grant him Aljannat firdaus. May his killers never know peace.

A principled and fearless leader. May Allah continue to have mercy on his gentle soul.

Although there are two schools of thought with regards to the commemoration of General Mohammed’s death, the fact is that even if the wound of the Asaba Massacre may have healed, the scar still remains visible.