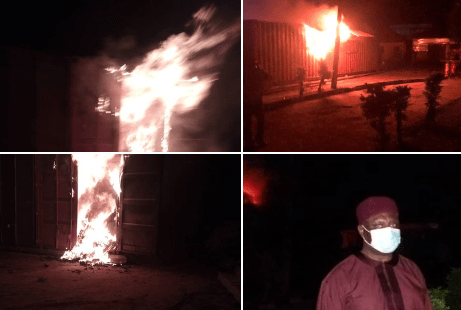 Fire on Thursday razed down the headquarters of the Independence National Electoral Commission (INEC) in Akure, destroying about 5,141 card readers meant for the October 10 Ondo State governorship poll.

The News Agency of Nigeria (NAN) learnt that the fire, which occurred at about 8.20 pm, gutted a large container housing the card readers.

Men of the State Fire Service, who arrived at the scene at about 9:19 pm, became helpless when their equipment could not function.

Mr Festus Okoye, the INEC Commissioner in Charge of Information and Voter Education, confirmed the incident to newsmen in Akure.

He said that the fire destroyed 5,141 card readers meant for the upcoming governorship election in the state.

Okoye, who gave assurance that the election would still go on, in spite of the incident, said that nothing would stop the poll.

He said: “The fire occurred in a container, where the card readers for the election and those meant for the training of the supervising and presiding officers were stored.

“It is unfortunate that we lost so many card readers but the incident would not in any way affect the conduct of the election.

“So, we are confident that this election will go on as scheduled.

Meanwhile, the Nigeria Security and Civil Defence Corps (NSCDC) and police have deployed more operatives to beef up security within the INEC premises.