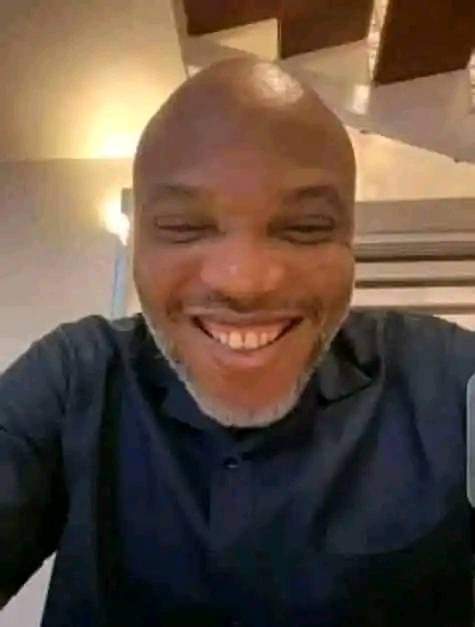 The application by Nigeria’s government’ for adjournment of a hearing regarding the judgement on the release of Nnamdi Kanu from detention has been rejected by the Appeal court in Abuja.

A three-member panel of the Court of Appeal led by Oludotun Adefope-Okojie had on 13 October dismissed the terrorism and treasonable felony charges against the leader of the proscribed Indigenous People of Biafra (IPOB).

The court had ordered Mr Kanu’s release from detention after striking out a seven-count charge pending before Binta Nyako of the Federal High Court in Abuja.

Mr Adefope-Okojie held that Mr Kanu’s forcible extradition from Kenya to Nigeria in June 2021 was a breach of local and international laws.

Instead of complying with the appellate court’s decision ordering Mr Kanu’s unconditional release, the office of the Attorney-General of the Federation (AGF) filed an appeal at the Supreme Court.

David Kaswe representing the office of the AGF, Abubakar Malami, filed an application for a stay of execution of the Court of Appeal’s verdict on the separatist leader.

At Monday’s proceedings, Mr Kaswe sought an adjournment for the hearing of the stay of execution application.

However, the appellate court panel led by Haruna Tsanami ordered Mr Kaswe to open arguments in the pending application.

Mr Kaswe based his request for an adjournment on the grounds that Mr Kanu’s lawyer, Mike Ozekhome, served him with a counter-affidavit to the application last Friday.

He said a list of one additional authority was served on him before the commencement of Monday’s hearing, adding that he needed time to respond to the issues.

But Mr Ozekhome, a Senior Advocate of Nigeria (SAN), opposed the government lawyer’s request for an adjournment.

Mr Ozekhome contended that the government was in violation of the Court of Appeal’s order of 13 October which ordered Mr Kanu’s unconditional release.

He argued that Mr Kanu’s fundamental human rights were being violated, saying the IPOB leader “is terminally ill.”

Why govt wants stay of execution of Appeal Court judgement
The federal government argued that Mr Kanu is a flight risk, barring any chance of releasing the IPOB leader.

In challenging the Court of Appeal’s decision, the government applied to the Supreme Court for an order staying the execution of the former’s decision.

Mr Kanu was first arrested in 2015 and charged with various offences including treasonable felony over his separatist activities championing the secession of the South-east and some parts of the South-south as an independent Biafra nation.

But he subsequently fled the country in September of the same year after soldiers invaded his home in Afara-Ukwu near Umuahia, Abia State.

That same month, the government obtained an order of the Federal High Court in Abuja proscribing IPOB and designating it as a terrorist organisation.

Mr Kanu, a dual citizen of Nigeria and the United Kingdom (UK), is believed to have settled down in the UK after leaving Nigeria.

But he was arrested in Kenya and brought back to Nigeria in June last year.

The government then raised the charges against him from seven to 15 to include terrorism offences he allegedly committed by inciting violence through social media posts.

But in a ruling delivered on 8 April, on an application by Mr Kanu’s legal team, the trial judge, Binta Nyako, of the Federal High Court in Abuja, struck out eight of the 15 counts.

Displeased that the judge did not strike out the entire charges, Mr Kanu further appealed to the Court of Appeal.

In its judgement on 13 October, a three-member panel of the Court of Appeal led by Oludotun Adefope-Okojie struck out the remaining seven terrorism charges, on the grounds that the government breached both local and international laws in Mr Kanu’s forcible rendition to Nigeria.

The panel said the trial court, the Federal High Court, lacked jurisdiction to continue Mr Kanu’s trial as a result of the breach of his fundamental rights by state.