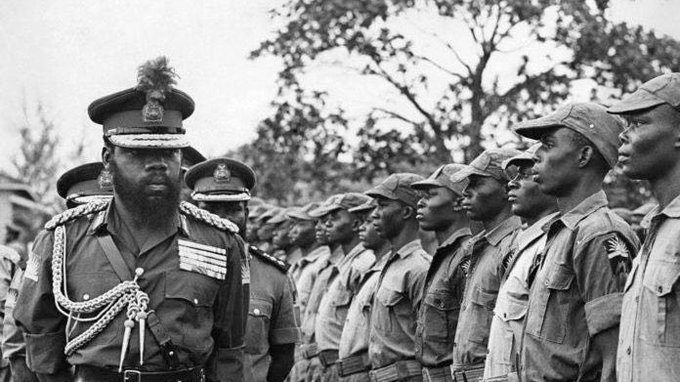 Today, May 30, is a day set aside by the Igbos (Biafrans during the Nigerian civil war), to honour their dead who lost their lives in the war.

As usual, Igbo History & Facts, an official Twitter handle that claims to publish verified Igbo History and Facts, some of which have been forgotten or eroded by Western culture, took to Twitter to remind the Igbos to commemorate the death of their fallen heroes.

“We Remember Our Fallen Heroes Today.Dear Igbo Nation, today, 30th May 2021, marks 51yrs since we sadly lost over 3 million Igbo brothers and sisters to Nigerian-Biafran Civil War.They gallantly fought and died for us to live,” it tweeted. The hashtags #Ozoemena #Biafra #BiafraHeroesDay2021
#BiafraRemembranceDay has been trending on Twitter in commemoration of the event.

Reacting to the anniversary of the Biafra Rememberance Day, human rights activist, Aisha Yesufu said on Twitter, “I have said it before and I say it again. We need to sit as a Nation & have the Biafran talk. The atrocities must be acknowledged, apologies given, atonement made and commitment to never go that path again.
The generation coming after us deserve a clean air.”

Still in the spirit of the Biafra Rememberance Day, a tweep, Obina Nwosu also acknowledged the gallantry of the Biafrans.

Another tweep known as Dr. Harvey Olufunmilayo lamented, “What Nigeria did to Biafra: 100,000 shot dead. 2 million (mostly kids) starved to death. 4.5 million displaced from their homes. 3 million became refugees.
This is the history the Nigerian Govt doesn’t want you to know. This is the evil we did to the Igbos. What a shame. #Ozoemena.

“Many of you have absolutely no idea what was done to Igbos. You think it was just a ‘war’.
On Oct 7 1967, the Nigerian Army summoned citizens of Asaba to say ‘one Nigeria’. They came out wearing white cloth & chanting songs. They were massacred. Just like that. In cold blood.

“After this, nigerian soldiers invaded Asaba. They raped young girls. They brutalised women. They massacred men and boys.
They destroyed homes
They wrecked indigenous artefacts.
They levelled and degraded the city.
They did same in Onitsha.
This was NOT a war. This was genocide.”

According to Wikipedia, The Nigerian Civil War (also known as the Biafran War and the Nigerian-Biafran War) was a civil war in Nigeria fought between the government of Nigeria headed by General Yakubu Gowon and the secessionist state of Biafra led by Lt. Colonel Odumegwu Ojukwu from 6 July 1967 to 15 January 1970.

Biafra represented nationalist aspirations of the Igbo people, whose leadership felt they could no longer coexist with the Northern-dominated federal government.

Unconfirmed sources report that over 3 million Igbos lost their lives in the war, leaving indelible horror and pain in the minds of the Igbo nation.

Moreover, as part of activities marking the anniversary of the Biafra Republic Remembrance Day, the leader the Indigenous People of Biafra (IPOB), Mazi Nnamdi Kanu, has ordered residents of the five southeastern states remain indoors on Monday for their own safety.